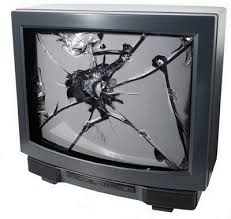 Over a week ago, we lost something in our house that was near and dear to us. Something that gave us lots of hours of entertainment and memories. Ladies and Gentleman, we lost our lovely living room TV. We were losing her for about a month, when we started to see lines develop at the top of the screen, but we decided to be totally frugal in the situation and “let it ride ’til the wheels fell off.” Our 42 inch beauty is now dead, gone, ka-put, and we would have never thought how much it would have changed us. Surprisingly, we haven’t missed it too much. This is the TV where we would watch family movies and where, late at night, I would finally catch up on the shows I had missed all day while on “mom duty” or working down at the base. Technically, this was MY television….I recorded all of my programs on this one, viewed our family videos on here and kept on while I sat on the living room floor clipping coupons. But, it hasn’t phased me, or the whole family in general, as much as I was expecting it to.

Change #1: I was hardly phased by the loss but DH was miserable. We actually ended up losing the old girl when our whole apartment complex had a power outage(second one that week)and we were without power for close to 4 hours. We anticipated everything coming back on once we got power back, but once DH saw that the ol’ girl was refusing to turn on, he panicked. I laughed. I seem to be doing that a lot these days in times of stress and testament. I mean, we knew it was coming! Why was he so upset? I asked him and he replied, “I feel like we didn’t have enough time together.” Ha! I just love that man. He’s insane.

Change #2: We’re getting more accomplished. I noticed now that since I don’t have the option to just turn on the TV when my favorite shows are coming on, I seem to be getting more done. I know you families out there without ANY televisions are thinking “duh, woman! no distraction equals more work done.” Yeah, yeah, I did know that but I always thought TV wasn’t much of a distraction to me. I used to use it as background noise when cooking, cleaning, what have you. I can’t stand total silence, not even when I’m sleeping. Now, like someone who isn’t a pyscho, I listen to my Ipod while cooking and cleaning. My Mother-In-Law was nice enough last year for Christmas to get me a stereo that hooks up to the Ipod and is small enough to fit on top of my fridge. I’ve been using it all year, but I’ve really been taking advantage of it recently.

Change #3: I have to decide which shows are worth my time and share that time with Hubby. Since the only working TV in our home is now located in the bedroom and Hubby has to get to bed at a decent time, I have to pick and choose which shows I will hog up the TV for. This actually has been harder for me than anything else, because I tend to be a channel surfer, since I know that most shows will be repeated. If I miss a part, I can always look for that show the next day. Not anymore! I decided which shows I do love and I think Hubby will not mind sitting with me to watch. We actually watch quite a few shows together already, but the “girlie” shows like Desperate Housewives and most of the stuff on TLC, I had to run by him first. Thank goodness he loves Jon and Kate plus 8.

Change #4: Sonny Boy and I are getting to bed earlier. Since the living room is right off of Sonny Boy’s room, whenever I would try to catch up on my shows at night, I risked the chance of keeping him up as well. Most of the time, he fell out like a ton of bricks when he hit his pillow, but there were nights when I’d hear him playing around in his room way late. I knew it was because he knew there was someone up in the next room and he decided to “join the party.” Well, since there’s no TV noise coming from the next room now, he stays asleep. And sleeps hard. I tend to take that time to catch up on e-mails now, or watch a show or two online, if I feel like it. As a result, I’ve been going to bed at least 2 hours earlier than I used to. At first I felt like I had missed out on something by not being online in the message boards, but I finally realize that I really haven’t. The only downfall is that I haven’t posted as many blog posts as I used to. I write my best at night.

Change #5: We are enjoying each other more. Well, we’re trying to. Sonny Boy seems to be biting my ankles even harder now that I’m on a mission to get more done, which causes a few problems, but Hubby loves when he comes home and yet another thing is different. Something is put away that has been out for months, another closet is cleared up, ever bit of dirty clothes are washed and cookies are in the oven. I feel like June Cleaver over here!

Now, the honeymoon won’t last for every long. We will be getting a new living room TV off of craigslist after the holidays. Even though we are enjoying the time off from the TV now, January is a whole different story. January is “American Idol” time. I need time alone with Simon. The boys will just get in the way. Simon, darling, I’ll see you soon. :o)

How about you all? Who doesn’t have TV in their house? Who knows that they can’t live without it? Anyone thinking about getting rid of theirs?