This Sopapilla Cheesecake Recipe is so easy to make – you will have to force yourself not to make it every week! Savory and sweet this is a treat the whole family will love. 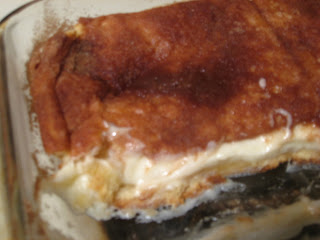 Do you all have a dessert that just looks ugly but tastes insane? You know, a “grub” type dessert that you would never see a picture of in a cookbook but taste like sin on a plate? Yeah, that’s what this sopapilla cheesecake turned out to be.

I found the recipe on Pioneer Woman’s site. She had a contest way back and asked her readers to give their favorite recipe in the comments section. Over 5,000 recipes were entered, and one person entered this one. If I could meet that person, I’d slap them right in the face for this. They should be ashamed of themselves.

I mean, butter, sugar, crescent rolls, sugar, cream cheese, cinnamon and did I mention sugar? Oh yeah, and more sugar. I felt myself going down a shame spiral with every bite.

My poor little baby nearly licked the paint off of his plate. Hubby pronounced it the best “dessert thing” he ever had. I thought I was going to go into a coma from all the sugar but did admit that it was delicious.

The following recipe isn’t the original. The original had waaaaaay too much butter and sugar, even for this uber-fan of Paula Deen.

So, I changed some measurements and identities to protect the innocent. P.S.- Did you catch the mug shot of the accused up top there? Only a dessert a mother(or 3 year old, or 28-year-old man) could love…*shudder*….

Prepare at your own risk!

Melt 1/2 stick of butter and pour over crescent rolls. Mix 1-1/2 tsp cinnamon and 1/4 cup sugar and sprinkle on top.

Bake at 350 for 30 minutes or until golden brown. It can be topped with fruit topping(we used cool whip!) or served warm with ice cream.