This is my husband’s favorite yogurt pie. Or, as we call it around here, “The yogurt pie that almost ended a friendship.” It’s an easy no-bake icebox pie recipe that causes lots of trouble. Enjoy this tale.

Here’s the back story.

Many moons ago, when Hubby and I were still a lovey-dovey single couple, before the engagement ring, I made this pie. And he loved it.

At the time, he was living with his 2 best friends, Mark and Mike. They’re brothers, and Hubby is their brother from another mother. These friendships were serious.

When I made the pie, Hubby and I pretty much ate the whole thing right on the couch. I fed it to him like the sick puppy I was, and he was content. That is, until the yogurt pie was almost gone and he realized I was leaving the next day to go back home.

This Is Where Things Got Crazy

That’s when he asked me to make him a strawberry yogurt pie as a parting gift. I did so the next morning, right before he took me to the airport.

When he got back home later that day, he licked his chops in anticipation for the first slice of his yogurt pie only to open the fridge door and see it gone. Poof. Missing.

At this same time, Hubby turned around and saw his best buddy, Mark, turning the corner to the kitchen with the pie in hand. His face covered in pie remains, and he was holding the biggest spoon they had in the place.

Still to this day, Hubby almost cries when I bring up that fateful day. They are still best buddies (Mark was the best man at our wedding), but the Hubs admits he will never look at his “brother” the same way again.

So, the passion behind this yogurt pie is the real deal. And rightly so. It’s easy to make, easy to slice, and VERY easy to eat.

Our go-to flavors are strawberry yogurt pie, blueberry, and raspberry, but you can try any flavors you like. Citrus, vanilla, chocolate, even! The possibilities are endless.

This yogurt pie recipe isn’t anything new, but most make yogurt pie with jello packets. As you can see, that’s not how I get down. Since my side of the family doesn’t eat animal gelatin or jello, I make my yogurt pie without jello. Also, my husband’s buddy Mark is a vegetarian, so that’s probably why this pie called to him. Probably. SNORT.

This made my version of yogurt pie a dessert I could serve to anyone, as long as they weren’t vegan. So, give this version a try if you’re serving it to a crowd.

*Tip- if you want it really hard and yummy, place it in the freezer for the 2 hours. It’s to die for! Also, this dessert is so easy to make into something low-fat.

I’ve made this for friends on weight watchers a few times and they love how many points they save by having this for dessert. 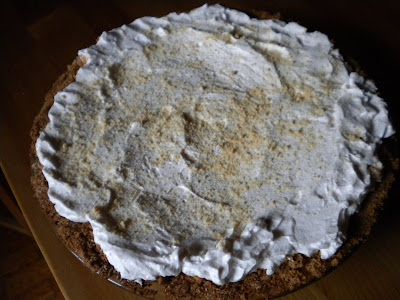