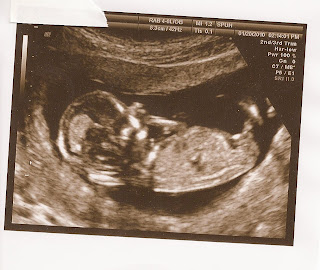 I have to admit, I was becoming really annoyed with my little duchess in my belly. Unlike her brother, she’s decided to stay put inside literally until she’s ready to come out. Sonny Boy was over 2 weeks early and I was ecstatic to let him out. At 7 pounds and 10 ounces, he was a chore to carry around during the last month. This is quite different from duchess.

So far, the docs see her as a petite bebe, weighing around 5 or 6 pounds.  With out earlier scare, this made me even more nervous to hear, since her brother was larger.  But, my own Mother reminded me that I was only 5 pounds 6 ounces and my sister was only 5 pounds 9 ounces, so she’s just following suit.  Once I got past that worry, I started to anticipate her arrival around 3 weeks ago.  I just KNEW she was gonna get here early since all the signs were here and I was feeling like utter poop. Well, Nope! She wasn’t ready and she was making sure I understood that.  She did try to make an arrival a few weeks back, but since everyone but her agreed that it was too early, she was bullied into staying in. Now, she’s bullying back. Well, I’m now seeing that maybe she was right to stay in.

Since the “diagnosis” was that I wasn’t dialated and she was coming down but definitely not ready, it’s caused me to ease up a bit. My anticipation of having to deal with a newborn around the time of my first born’s birthday had gone and the nervousness of realizing that maybe we still don’t have all the items we’ll need subsided. It was what it was and I knew that I just might actually make it to my due date this time around and I could plan accordingly.

We have an induction planned(tomorrow night!), babysitter and bags packed and even a great back up plan if it turns out that I may end up getting a C-section. All of these things were still up in the air when I so-called wanted her to come. It’s also helped with our extended family. My Mother in Law was able to check flights now, since she has a date to go by, and she can even hold off until Friday or Saturday to see if a C-Section is in order and she’ll have a few more days to pad since I’ll have to be in the hospital longer.  Also, my whole, and I mean WHOLE family will be on their way to our yearly family reunion by the 29th. It’s going to be held in North Carolina this year, so some are leaving a day or two earlier to drive down. We were very worried that we would be stranded without help when she decided to show up, but now she’s “allowing” my body to dilate, hence the scheduled induction on Friday. This means that Sonny Boy can hang with his grand parents for a few days while I’m in the hospital, and my parents get to see their new granddaughter before the jet off to the south. This makes me happy to no end. It will also mean that we won’t have any family members trying to “surprise visit” the week after I get out of the hospital. They’ll all be gone and we can start living like a family of 4 on our own for a little bit without interruption.

So, as much as I hate to say this, my daughter was right. She needed to “cook” longer and allow me to stop being so crazy about things. Thanks for the lesson duchess….but don’t get used to “teaching” Mommy. I’m supposed to teach you, right?