A Tale of Two Parties- Duchess(part 1)

Well, now it’s time to talk about how I planned the little girl’s 1st birthday party!

Because her brother’s party was first, it was easier, and more difficult, to get hers finalized. It was easier because whatever was left over from his party, table covers, party favors, plates, napkins and the like, were all transferred to be used at her party. On the other hand, it was more difficult because the same guest list from Sonny’s party was coming to her party, so I had to find ways to switch up the menu, the party schedule, and to make it more of a party that suited the little girl’s personality. Like you haven’t guessed this already, having two plan 2 kids’ parties back to back blows. 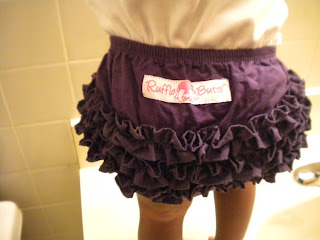 These bloomers from Ruffle Butts were the inspiration for the whole party. I had gotten them for her either right before she was born or right after, and they were just so darling that I decided right then and there to plan her birthday party around them. Plus, I knew she wouldn’t be able to wear them until she was about 12 months, so it was perfect.
Once people started asking about her birthday, I made sure that they knew the theme would be purple and polka dots, the two things I love to dress her in. I had done some thing similar for Sonny’s first birthday by making the theme primary colors. I find that this is one of the best ideas when planning a party for a baby or toddler. Make the theme an actual color, or even a shape, and you won’t have to deal with finding Spongebob plates and cups and hats and all the other ridiculousness. Plus, by doing it this way, you’re able to find most of what you need at the grocery stores, dollars stores, or even the dollar sections at Walmart and Target. If you dare waste money on balloons, you can get lots of the latex ones in basic colors, or the one color you picked, and not have to spend an extra 30 to 40 bucks for the “big 1” balloon or the ones with the silly cartoon characters.

Since the guest list was similar, I then turned to the food. Sonny’s was mostly based on what the kids love to eat: hot dog bar, chocolate bar, lots of chips, pickles, beans, etc.  This time around, since the guest of honor really didn’t have an opinion on the food, I made it more of an adult fare.
I made an asian noodle salad, macaroni salad, deviled eggs, and a balsamic fruit salad(add whatever fruits you want, except maybe bananas, sprinkle with sugar, a dash of vanilla, and a turn of balsamic vinegar; let sit overnight). If I had the time, I would have ran to Aldi’s to get a few bags of Romaine Salad as well. All of these things were made with what I already had in the house. I had promised myself that I wasn’t going to go all out on the second party when it came to the food like I did with the first, but I would make sure I created some great dishes.

When it came to the grilled items, I decided to class it up, We did have hamburgers and hots dogs(I mean, it is summer) but we also added into the mix some teriyaki beef skewers and BBQ chicken skewers. The steak I got on clearance about 2 months ago and was saving it just for this occasion. I sliced the pieces length-wise, and let them marinate in my homemade teriyaki sauce. The chicken breasts had been stockpiled over the last 2 months; whenever one of my stores had it on sale for 1.49 or less a pound, I grabbed it up. So….we had A LOT of chicken to grill.

Tomorrow, I’ll continue to tell you about how our inexpensive 1st birthday party suddenly turned expensive, thanks to the heat wave.