A Tale of Two Parties- Sonny(part 2)

If you missed part 1, check it out here.

Besides the hot dog bar, I was adamant on having some type of chocolate bar. Sonny has a complete “thing” for chocolate so I wanted to feature that during the cake cutting and dessert time. I do think it’s important to feature at least one or two of the child’s favorite things at a party, especially if they are school age and can tell you what they love.

Last year, we featured trucks and cars as a theme, with each table having one of Sonny’s favorite cars and trucks as the centerpiece. The ones that were open or were a dump truck style held some of his favorite candies in the open area. That went over great with the kids and adults alike. The same reaction was had during Sonny’s chocolate bar this year.

CVS had a sale on chocolate that week, which also counted towards a gas card. I took advantage of that deal and stocked up on some chocolate for the dessert buffet. We had some candy already stockpiled here as well, and to top it all off I decided to make a new recipe of Nutella Brownie bites. We’ve become big fans of nutella here and I knew that it would be a great addition to my chocolate frosting brownie recipe. They were also a hit. The chocolate bar was so much of a success that the adults were asking if they could attack the candy way before the kids even had a chance to see it. I had to slap a good amount of hands away from the table. 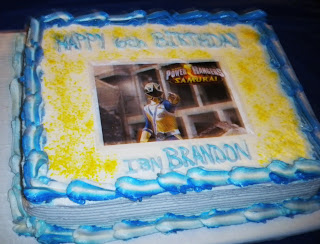 When it came to the cake and decorations, that’s where I hit a roadblock. Sonny was all about these power rangers, but my mom was having a hard time finding a good enough picture to turn into an edible creation to top the cake.  I also had difficulty finding anything power ranger related at the party stores. I at least wanted to find some party hats or cake plates with the characters featured, to continue the theme of the party.  We thought of doing a Spongebob Squarepants theme as a back up and up until the day before, it looked like that was the way we were going to have to go. I absolutely hate to have complete theme parties because the cost can get outrageous quickly. My thoughts were I would stick with the colors, not the pictures, of whatever theme we decided on. A Spongebob party would have yellow and green balloons, along with yellow party tablecloths and maybe even a few green plates(that I had stockpiled already). We did end up being able to do the power ranger theme, but because of the last minute, I didn’t get to grab balloons in the color. The tablecloths were blue and gold, his two favorite rangers, and only cost me 1.50 each. And guess what? He didn’t even notice there weren’t any balloons. That was money saved there.

Our biggest save was his “big gift” from Mom and Dad. It was the last gift he opened and one that we were so excited to finally get him. Thanks to a great twitter party I attended, I won a 50 dollar gift code to a deal site. I had been studying the site since I won, looking for the perfect gift for Sonny. Finally, they posted a great deal on a bike with removable training wheels. With shipping, I ended up spending about 4 dollars on this 80+ dollar bike. I had read reviews on it and did research and it was a great find. We ended the night with a wonderful moment; Sonny trying to ride his bike with Dad at his side. In that moment, I was happy that I did all the work I did to make it a great(and inexpensive) party for him.  He had a great time, all of the guests left with smiles on their faces and I could relax. Well, that is until the next party in a few weeks.