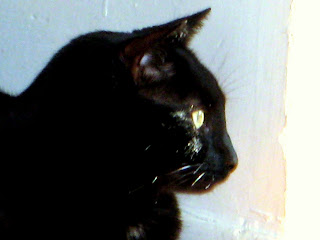 I sometimes feel like my little kitty is kind of the step-child on this blog. Unlike the other kids, he only gets posts dedicated to him once in a blue moon. My poor furry baby. Why is he treated so? I have no idea. I think it may be because he hardly makes a sound unless he’s hungry, and his siblings make a point of making as much noise as possible. Well, today, our kitty boy takes center stage. Here are a few facts about our favorite child with fur:

-He’s not a fan of dancing. When we dance with the kids or play the Wii, he looks at us with wild eyes and sometimes meow. He must think we’re having seizures. I don’t blame him.

– When the kids are babies, he is VERY protective. When they are infants and they stir or whimper, he’s the first one up and the only one who jumps up on our bed and sniffs my face, or meow, to wake me up. That’s treat-worthy behavior. 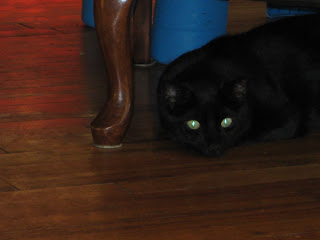 – He’s all black except for his “old man’s tuff” of gray hair right under his chin. This makes him beyond cute.

– He likes to “kiss” my eyes. He’ll sit on the couch next to me and sniff my eyelashes, but he won’t let me do it back. How selfish.

– He was a rescue. My dad rescued my first black cat when I was five. He found her hiding on a railroad track where her mother must have left her; she was pretty much still a newborn. I always knew that if I ever got another cat, he/she would be a rescue and a bit older since kittens are a handful to raise. It was love at first sight.

– He can predict Earthquakes. When we had that unbelievable Earthquake here on the East Coast in August, he was acting weird for about an hour before. Pacing, running from room to room to keep track of us, and peeking out of each window periodically. He did this until about 5 minutes before the quake came. Once it was happening he was on me like white on rice, giving me eyes that I’ve never seen him do before. I think he was telling me “Hey dummy! Something’s happening! Get the hell of the couch and hide the kids!” Smart kitty.

– He wishes he has thumbs. Ok, this is something that we joke about here, and we have no idea if he really wishes this, but he might. When he stares at us having dessert, especially ice cream, he sniffs the air and makes a bee-line to our side. I always tell Hubby that he’s wishing he had thumbs so he could dish out his own ice cream. Could you imagine? Cats with thumbs?! We’d all be in trouble.

– He’s an important part of our family, not just a pet. When we had Hurricane Irene threaten to tear a whole in New Jersey, we decided to abandon ship and take refuge at my parents’ house. One of the first questions we asked was if Pinball(oh yeah, that’s his name) would be allowed to come. If not, we were staying put. There was no way we felt comfortable leaving him alone. Luckily he got to come with us and i’m quite sure he saw it as a vacation. He actually cried the next day when we had to leave.

So, those are a few tidbits about my oldest boy who will forever be the smallest sibling. He rocks my socks off and pushes my cuddle button.