In case you missed it, here is the first post of this series: Rainbow Party Decorations

The best way to make a party special while staying inexpensive is to pay attention to the details. While we may not be able to use a party planner and have decorations with the kids’ names plastered all over them, we do what we can with what we have. So this year, I decided to make a cool, kid-friendly centerpiece for the gift table. What resulted was a rainbow candy centerpiece. 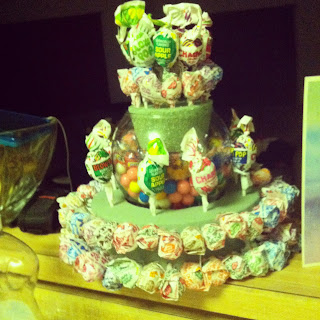 I was inspired by the foam forms that florists use to make arrangements. They had different kinds at the dollar store and I thought it would be cute to place lollipops all around them rather than flowers. We had a round glass fish bowl under our kitchen sink for quite some time, so I decided that needed to be used as well. It was filled to the brim with with gum balls that I also got from the dollar store. I used single packaged gum balls to fill in the top, in case someone wanted to take a few home, or the kids wanted to add them to their goody bags.

The foam that went into the top of the fish bowl was adorned with blow pops and dum dums. I surrounded the round foam form on the bottom with just dum dums. I also placed blow pops all around the top of the round form. If I had the time (or more money) I would have but blow pops in the middle of the two rows to fill in the centerpiece. But, I think it looked pretty good all on it’s own. 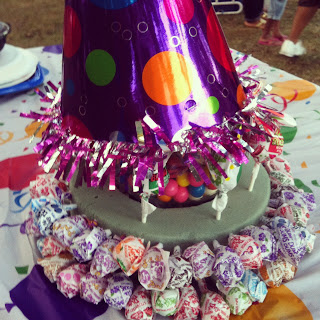 I placed the kids’ birthday hats on top of the whole centerpiece and used the rainbow candy centerpiece to direct people towards the gift table. It was a hit with the kids AND parents! By the end of the party, I let each kid take one blow pop and two dum dums. The parents were so jealous that they asked to take home some of the candy for themselves! I was tickled pink over that and, of course, obliged.
All in all, it took me about 20 minutes to make this centerpiece. Not too bad for something that was the talk of the party.

Need more ideas? Check out my tutorial for personalized birthday t-shirts for your kids. It’s easy and inexpensive!