Yes Virginia, there is Shiitake Sushi

I like to think of myself as an upscale foodie. I’ve tried mayonnaise and Miracle Whip, tasted Dark chocolate FROM EUROPE, and had pumpkin and blueberry ice cream. I’m so evolved. Now, imagine my surprise when I found out that one of my favorite foods, sushi, could be combined with one of my other favorite foods. I’m talking about Shiitake Sushi. Where has this been all of my life? 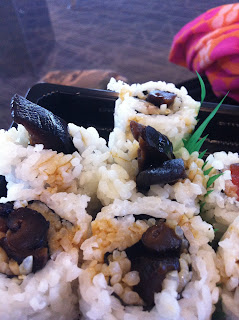 It was Friday afternoon. I had just gotten through airport security by the skin of my teeth (I had Christmas throwing butter knives I was transporting over state lines. That will be explained at a later date). As I lugged my carry-ons to my the designated gate, I saw that there was a sushi joint open for business. Sushi at the airport? There’s no way it could be great. But, I was hungry and didn’t really give a crap about “great” sushi. I ventured in and saw it, right on the menu: Shiitake sushi roll. I ordered immediately.

The unctuous taste of the that “meaty” mushroom, combined with the sweetness of the sauce it was tossed in, sent my taste buds to explosive territory. Add in a little bit of soy sauce, and the perfectly cooked sushi rice surrounding the savory shrooms, and I was instantly taken to culinary heaven. In an airport. In Newark, NJ.

It was such a confusing and enlightening experience. I’m now on the hunt for a sushi place that may be able to replicate the deliciousness that is airport shiitake sushi. As Morimoto is my witness, I will find it!

Can you tell how much I love sushi and mushrooms? It’s getting worse (or better?) with age, you guys. Pray for me.